The digitalization of the German Health System is progressing. One essential part for the users is having a digital identity on a health card that authenticates oneself. OpenHealthCardKit is the link to provide access to this card via a mobile device. It abstracts the technical communication and provides a semantic interface for your use case. With OpenHealthCardKit, accessing a card’s data and applications in your health-related app is now easy.

OpenHealthCardKit (OHC) started as a proof of concept for using smart card hardware interfaces with mobile devices with no NFC interface to connect them with German health cards (elektronische Gesundheitskarte → eGK). As Apple added NFC capabilities to their mobile devices and finally opened them for general purposes, we added just another interface implementation, and OHCKit gained the ability to talk to eGKs on iPhones contactless. The OHCKit repository also comes with a demo application, “OpenHealthCard connect” (see Fig. 1), also available on AppStore 1. 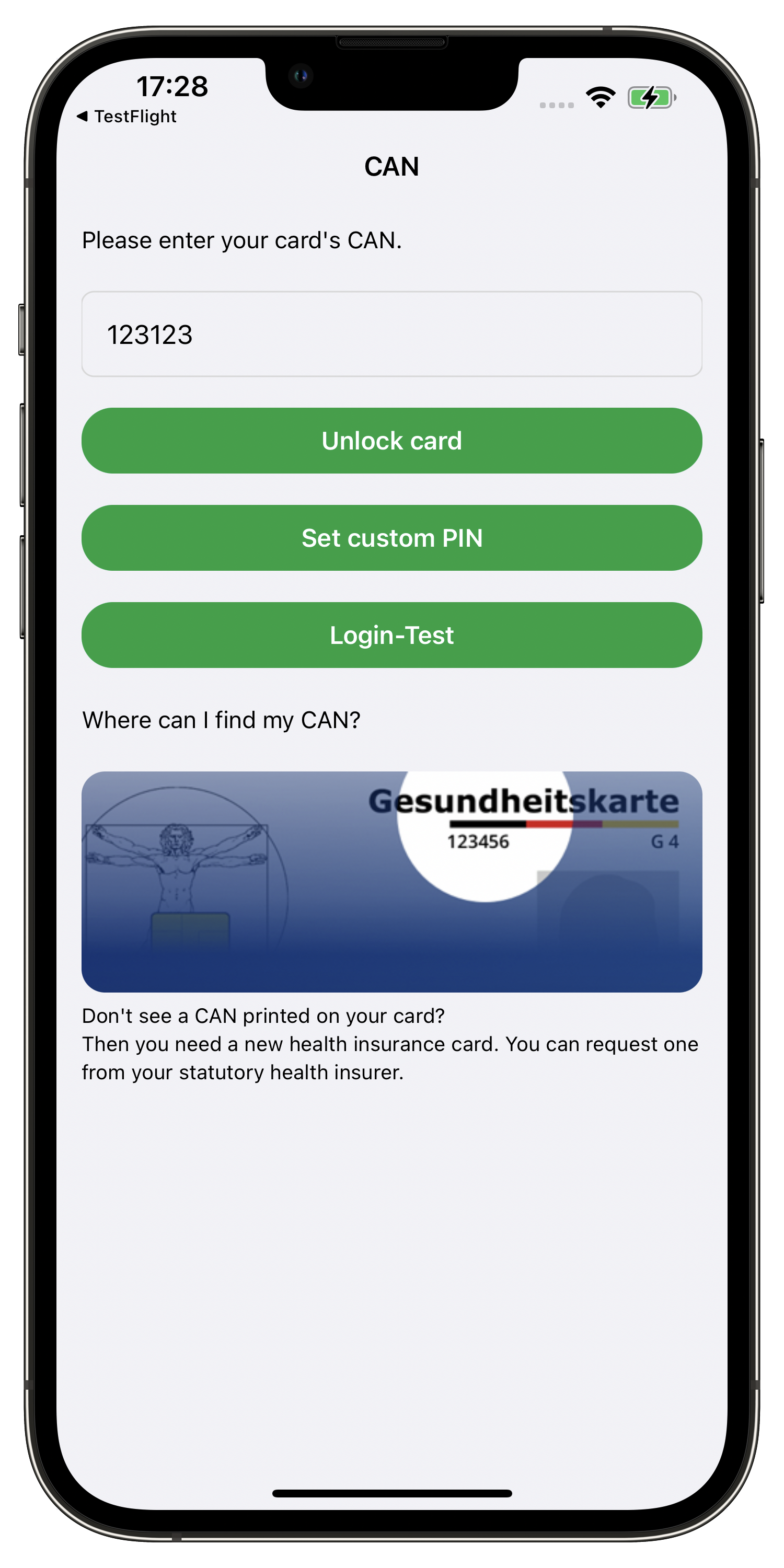 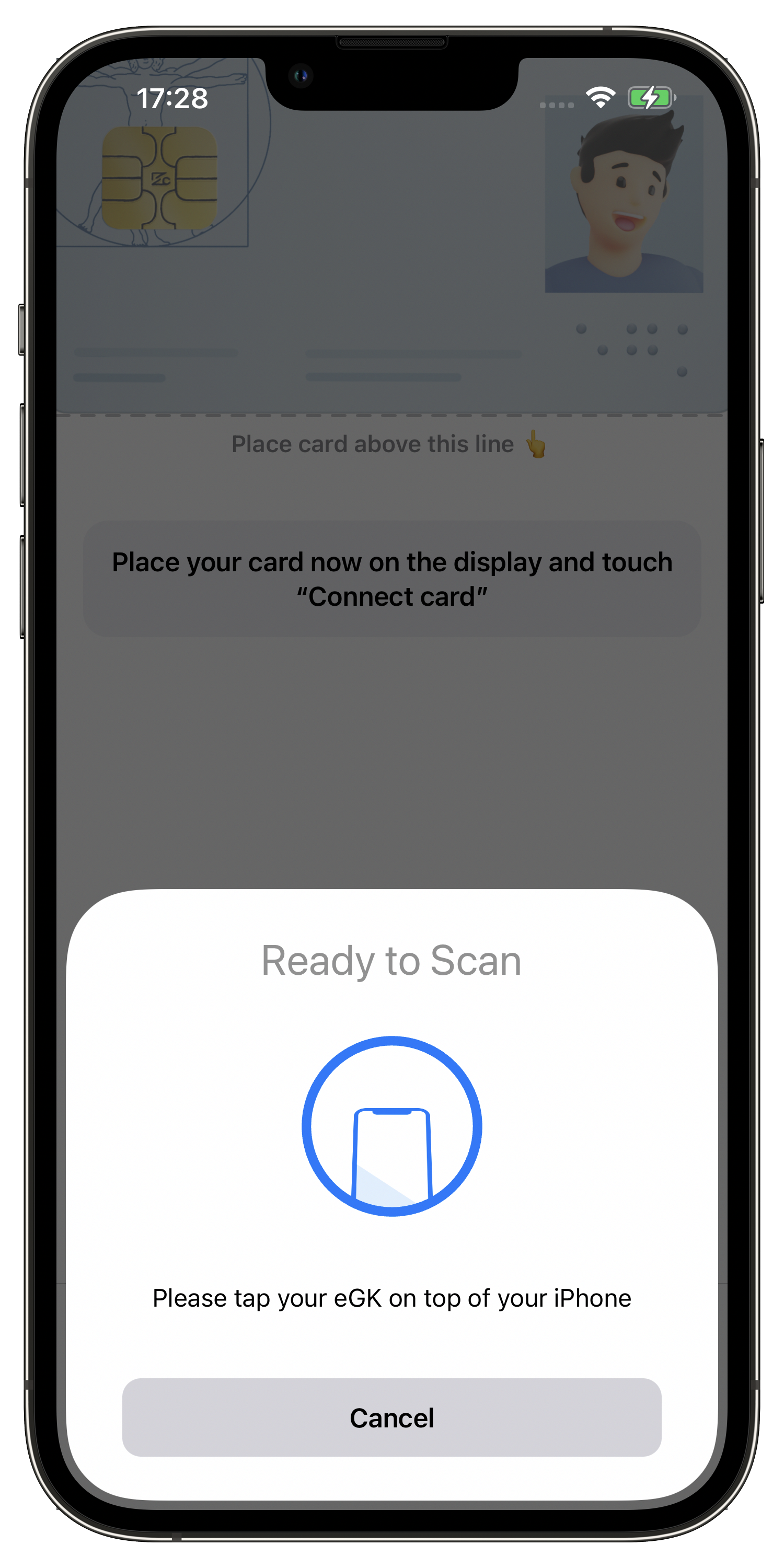 Later on, gematik got the mandate to implement the official E-Prescription App2. The E-Rezept-App employs the eGK to authenticate the user against an identity provider (IDP) and uses OHCKit for this task.

Fun Fact: As far as we know, the “OpenHealthCard connect” App is the first mobile application that let’s you reset your eGK’s PIN regardless of your insurance company.

repeat these steps in a meaningful way.

So OHCKit does just that (and a little more).

The groundwork of the framework is specified by three documents.

All this technical depth is abstracted by OHCKit and its sub-modules.

Keep in mind that, while these documents describe the content and behavior of smart cards, one can derive the desired behavior of the coupling device, i.e. how this framework can achieve it.

Fun Fact: The specification gemSpec_COS was created over 10 years ago and has about 500-550 pages - depending on the revision

The architectural structure of the OpenHealthCardKit framework mainly consists of three layers that build on one another. These layers also resemble the specifications discussed above.

Some technologies and protocols employed in the German/European health sector PKI environment are uncommon in the mobile world (and some are almost unique to it). As a result, we had to learn that neither the standard SDK-provided tooling nor the open-source-based projects accessible quite match our needs.

To overcome this issue,  we developed and maintain yet another two frameworks that we’d like to draw your attention to:

Abstract Syntax Notation One (ASN.1) is a standard for putting data in a structure that can be serialized and deserialized. Albeit being broadly used in networking and cryptography, out-of-the-box support for inspection and creation of custom ASN.1-serialized data is unavailable on iOS. Smart cards often send and expect data that is ASN.1-encoded, so having a good handle on this undertaking was unavoidable. For lack of viable alternatives, we created our own Swift-native framework ASN1Kit4 to aid our needs.

We also extensively use the power of this framework in the official E-Prescription App.

Whenever you work with cryptographic algorithms on the administrative side of the German health sector context, it is inevitable to sooner or later cross paths with

all required and specified by the Federal Office for Information Security (BSI).

While ECC, in general, is supported by iOS, namely the Brainpool-curves are not. Even if they were, the PACE protocol uses a peculiar arithmetic operation that high-level key-exchange interfaces usually don’t expose.

Initially, there was no solution to these problems available to us, besides implementing the Elliptic Curve cryptography by ourselves (what we actually did in the proof of concept stage).

Later we created OpenSSL-Swift5, a wrapper framework for gematik- and BSI-specific crypto operations with an embedded OpenSSL library. It mainly serves two purposes:

That is a lot of bases to cover from cross-compiling C code, bridging it to the Swift world, and then aiding some of the quirks that performing cryptographic operations in our context demands from us. Seeing all this work out makes us very proud and amazes us to this day.

Fun Fact: Whenever a German ID card or passport is addressed via the NFC interface, the very same PACE protocol with underlying Brainpool Elliptic Curve cryptography we just outlined is employed.

Where to go from here?

OpenHealthCardKit is available as open source software on GitHub3. You can find some use cases in the Readme and the demo app that is included within the repository. The demo app is also available for free on the AppStore1.

Gerald Bartz has been a software developer for five years, four years on iOS. At gematik he enjoys porting not-so-standard cryptographic algorithms to the mobile world.

Martin Fiebig has worked as a software engineer for 18 years, 10 years on iOS and Apple Platforms. His focus topics include large scale mobile applications and developer experience. Martin leads the iOS Development Chapter at gematik since 2020.